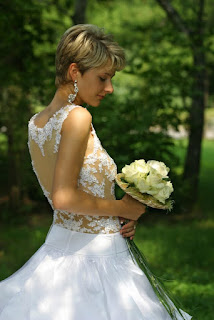 Second marriage weddings are becoming much more common, which means many of the wedding traditions are changing. There are a number of alternatives and choices that may fit your individual situation. Your decisions may be determined by you and your fiancé’s age, whether children are involved, or if this is a second marriage for either of you.

Announcing Your Engagement for a Second Wedding

When children from previous marriages are involved, you should tell them first. Chances are they already have an idea, but they still need to hear the news from you. A second marriage wedding should be handled carefully and with love. You want them to feel they are gaining another caring adult in their lives. You don't want them to feel as if they're losing a parent or having an existing parent replaced. You also need to notify a former spouse when children are involved, preferably before the children spill the news.

If the bride is getting married for the first time, then everything remains traditional. The second marriage wedding may be as formal and religious as you would like, depending on your particular-denomination.

One of the first things you should do when planning a second wedding is to find out all regulations or restrictions on the remarriage of a divorced person. Your house of worship or officiant is a good place to start.

If the bride has been married before, a semi-formal or informal wedding is usually chosen, rather than a large, very formal wedding. The exception to this would be if the bride never had a large, formal first wedding, or has no children. Another exception could be when it is the bride's second, but the groom's first marriage. In this case the groom's parents may want to host the wedding or the couple may choose to pay for it themselves. In any case, it is not right to expect the bride's family to pay for a second large wedding.

When it is both the bride's and the groom's second marriage, it is best to have a tasteful semi-formal or informal wedding. It may still be in a church, chapel, home, hotel, or club. There should be a maid or matron of honor in the ceremony but no bridesmaids. Similarly, the groom should have a best man but should only have ushers if they are needed, and they would not stand at the altar. When there are children from previous marriages, the couple may want to involve them in some way, depending on their ages.

With the increase of second marriage weddings, designers in the bridal industry are making a great number of beautiful dresses for the encore bride-to-be. You may select a romantically feminine, lacy dress of mid-calf or ankle length in white or ivory, or a traditionally elegant knee length dress or suit in white or pastel. What you choose to wear will depend on the formality of the ceremony, the time of day and, most important, what you feel good wearing.

Yes, you may wear white. However, a veil, the symbol of virginity, should not be worn. Instead, wear a hat or a wreath of fresh flowers. You may also want to carry a bouquet or a flower-trimmed prayer book.

When the ceremony is larger than just a few close friends and relatives, including, say, thirty or more guests, you should send printed invitations. Usually the person who is hosting the ceremony and reception issues the invitations. Again the wording of them will depend on your individual situation (examples are given in the chapter on invitations).

Gifts are not expected for a second marriage wedding, though many guests may choose to send one. Accept any gifts graciously and acknowledge them with thank you notes. It is not correct to indicate "no gifts" on the invitation.

When a large reception follows a small cere­mony, a formal reception invitation should be sent to all the guests; simply insert a ceremony card for guests who are invited to both.

The reception may be any size or style you wish. Neither the bride's nor the groom's previous marriages have any effect on this. Having a large reception is a nice way to include friends who couldn't be a part of the ceremony.

You may still toast with champagne, cut the wedding cake, and have a "first dance." You might want to consider omitting first wedding customs like tossing the bride's bouquet and garter.

Reaffirming wedding vows is becoming more popular, especially with couples who had civil ceremonies or eloped, due to convenience or lack of finances. The renewal of vows occasionally takes place shortly after the wedding day, but more commonly takes place years after the couple was originally married.

The couple may choose to repeat the same vows they once said, or they may want to write new ones that express the way their love for one another has grown over the years. The ceremony possibilities for a reaffirmation are varied. You may choose a small ceremony with close friends and family, or a larger one that includes new friends you have acquired over the years. You may want to have it in a church, in your home, or in the garden, a perfect symbol of the life you have nurtured together. It's a nice idea to make children, if there are any, a part of the ceremony. Many choose to combine it with a special anniversary, such as the tenth or twenty-fifth. Then they have the ceremony first, followed by a festive party.

Take 10% off your entire order of wedding favors and wedding accessories at WhereBridesGo.com! Use coupon code BLOG at checkout.

Popular posts from this blog

December 08, 2013
There's no need to be  overwhelmed with the thought of planning your big day. Sit down, take a deep breath, grab a cup of tea or a glass of wine and look over our popular 12-month planning guide. Planning a wedding is simply a matter of getting organized. 11-12 Months Before the Wedding Officially announce your engagement online and in your local paper. Bride's Planning Tote Decide on a time and date for the wedding. Decide style of ceremony (size, setting, formality, etc.). Contact a wedding officiate. Arrange for your families to meet if they haven't met before. Develop a budget and decide who will pay for what. Begin compiling your guest list. Visit and reserve your reception venue. 9-10 Months Before the Wedding Order your wedding gown and determine who will make any necessary alterations. Choose your wedding party. Decide on a color scheme (consider the recepti
2 comments
Read more

Are You THAT Wedding Guest?

August 21, 2015
We've all been to a wedding where at least one or two of the guests got a little out of line. Whether you're in the bridal party or there as a guest, dealing with difficult guests can be incredibly frustrating. If you're going to a wedding, you'll probably try to be on your best behavior - but what if you commit one of these classic wedding guest faux pas without even trying to?  The team at WhereBridesGo.com has compiled a quick list of some of the most common (and annoying) wedding guest faux pas. Don't get caught doing one of these! 1.  Not Controlling Your Children Misbehaving children can ruin an event faster than almost anything else. As a result, it's not uncommon for brides and grooms to ask that children not attend the ceremony or reception. If you have kids that will be coming with you to the wedding (and they should only be coming with you if they were specifically invited), make sure you keep them on their best behavior. 2.  Crowding The D
Post a Comment
Read more

8 Tips to Save Money on Your Wedding Flowers

December 28, 2013
Yes, you CAN have a beautiful wedding with wonderful flowers -- without breaking the bank. All you need is a little creativity and these eight tips to help cut your floral costs. Integrate festive balloons with your floral arrangements. Balloons are decidedly less expensive than flowers and they can be used at your reception venue to provide an elegant and festive atmosphere. Many balloon artists are now mixing balloons with pretty white lights for evening weddings. These are beautiful! Select flowers that are in season. Selecting flowers in season will dramatically cut your costs. If you have your heart set on exotic flowers that either out-of-season or hard to get in your region, consider using silk flowers instead. Limit the size of your wed
1 comment
Read more
Tweets by @wherebridesgo